Taking a look at where Kyle Hamilton and others will be drafted this weekend. 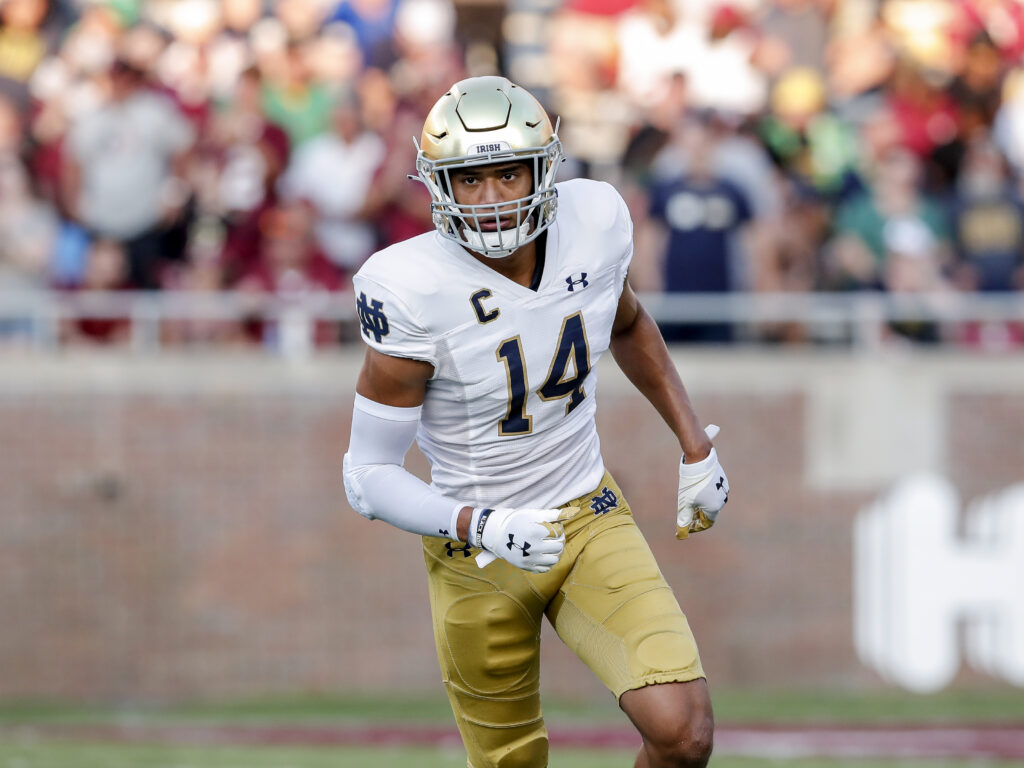 TALLAHASSEE, FL - SEPTEMBER 5: Safety Kyle Hamilton #14 of the Notre Dame Fighting Irish during warm-ups before the start of the game against the Florida State Seminoles at Doak Campbell Stadium on Bobby Bowden Field on September 5, 2021 in Tallahassee, Florida. The Fighting Irish defeated the Seminoles 41 to 38 OT. (Photo by Don Juan Moore/Getty Images)
Share
Facebook Twitter Email

Happy draft week! Arguably the greatest weekend of the offseason is upon us (outside of actual football games), and we will have you covered the entire time on CLNSMedia.com. Check out some of our pre-draft content HERE:

Our partners at BetOnline.ag have draft position bets posted for all of the top prospects. Below I take a look at the top secondary players in this year’s draft, and give my pick on where they’ll be taken:

The Scoop: “Sauce” Gardner is the top corner in this class. He helped carry the Bearcats to a CFB Playoff berth – something a non-Power five school had never done before, and will be highly compensated for it. A team in the top five will rush to the podium to turn in the card.

The Scoop: Gardner being picked in the top six will presumably start a run of defensive backs being taken, and Andrew Booth will benefit from that. The junior from Clemson was First-Team All-ACC in 2021, and is ready to lock down receivers in the pros. A team in the top 28 will get a good one in the former Tiger.

The Scoop: Dax Hill ran a 4.38 40-yard dash at this year’s combine, but at 6-feet tall 191 pounds – he’s not blowing anyone away with his size. The lightning-fast safety from Michigan will probably fall out of the first round and make an NFL team very happy on Friday.

The Scoop: With the abundance of talent in the secondary this year, Derek Stingley Jr. has sort of become the odd man out. The 2x First-Team All-SEC corner only played in three games in 2021, but posted solid numbers at the combine in February. He’s also only 20 years old. Teams are making a big mistake, but Stingley will fall out of the top 10.

The Scoop: Kyle Hamilton is by far my favorite player in this draft class. The 6’4″ 220-pound safety from Notre Dame was an absolute monster in college. He has the size to succeed in the pros – and although he didn’t test well, he has the pure instincts to be a Pro-Bowl safety as soon as this year.

The Scoop: McDuffie is 5-10, 193 pounds but plays like the biggest guy on the field. He ran a 4.44 40-yard dash at February’s combine, and is presumed to be a day-one NFL starter. Could we see him in New England? I think so. McDuffie falls into the Patriots lap at pick 21.